Times: Extraordinary trips to Vietnam in 2022

Observing French colonial buildings, visiting Buddhist temples, and trying the tasty street food in Hanoi are among the suggestions of The Times to foreign visitors to Vietnam.

The United Kingdom’s newspaper calls Vietnam a “rising star” in Southeast Asia as the country reopened its borders to foreign tourists in mid-March. 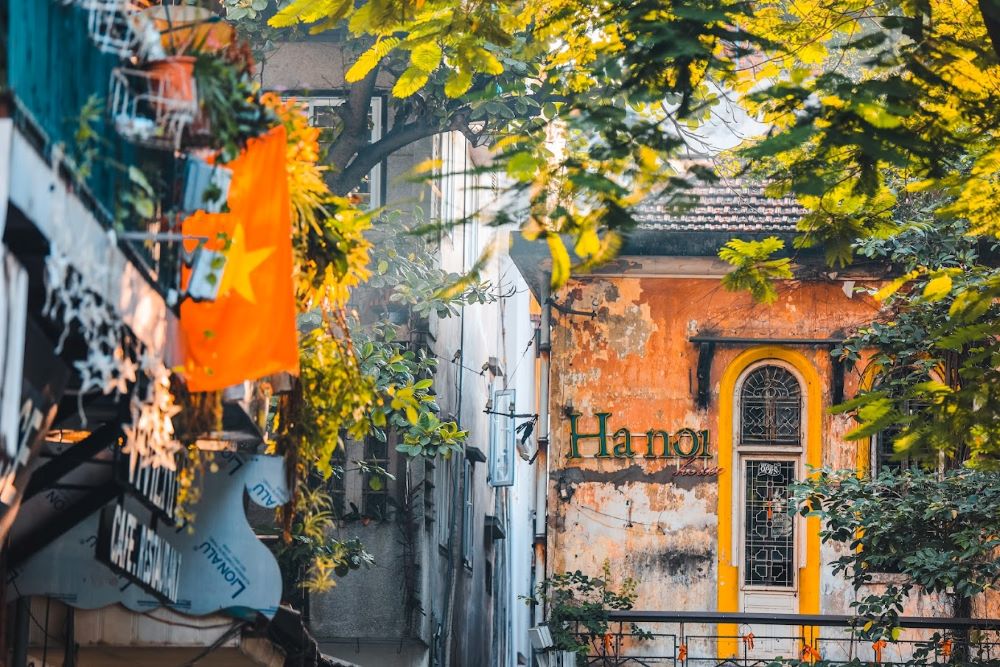 In fact, the country possesses countless delicious dishes promising to satisfy the most discerning travelers. “If you’ve been to Vietnam you may have spent lockdown dreaming of aromatic noodle soups or banh cuon, which is minced pork, crispy shallots and wood-ear mushrooms stuffed into the softest of rice pancakes, she wrote.

“If you’ve not yet had the pleasure, this rising star of Southeast Asia deserves to top your bucket list,” she added.

Besides the food, Claire also introduces tours that international tourists should try as soon as they arrive in Vietnam in 2022.

Van Long Lagoon in Ninh Binh Province. Photo: Ninh Binh Tourism
The first thing that The Times suggested is a 22-night-go-wild tour to discover Vietnam all the way from north to south. The newspaper advised travelers to go off-piste to a local village near Hanoi, spot endangered Delacour’s langur in Van Long (Ninh Binh Province); take a deep dive into the earth’s treasures at Phong Nha Cave (Quang Binh Province); do kayaking along the river winding past paddies and pagodas to Hoi An (Quang Nam Province); and end the journey at Con Dao Island to see turtles laying eggs and do scuba diving to watch the marvelous corals.

The Tra Su Melaleuca Forest in An Giang Province, Mekong River Delta. Photo: Travel Mag
The 16-day-classic Mekong tour can be one of the best choices for international travelers, according to The Times.

“Start not in Vietnam but at the otherworldly ruins of Angkor Wat in Cambodia, then board the Victoria Mekong, the first eco-cruise on the river, towards Vietnam,” the Times suggested.

After touring buzzing Ho Chi Minh City, stroll riverside Hoi An, brimming with ochre-hued merchant homes, temples and top restaurants. Hanoi’s French colonial buildings rub up against Buddhist pagodas and street stalls. Take it all in by cyclo (traditional tricycle taxi). Before heading home, sail on a junk into the teal waters of Halong Bay studded with thousands of karst pillars. 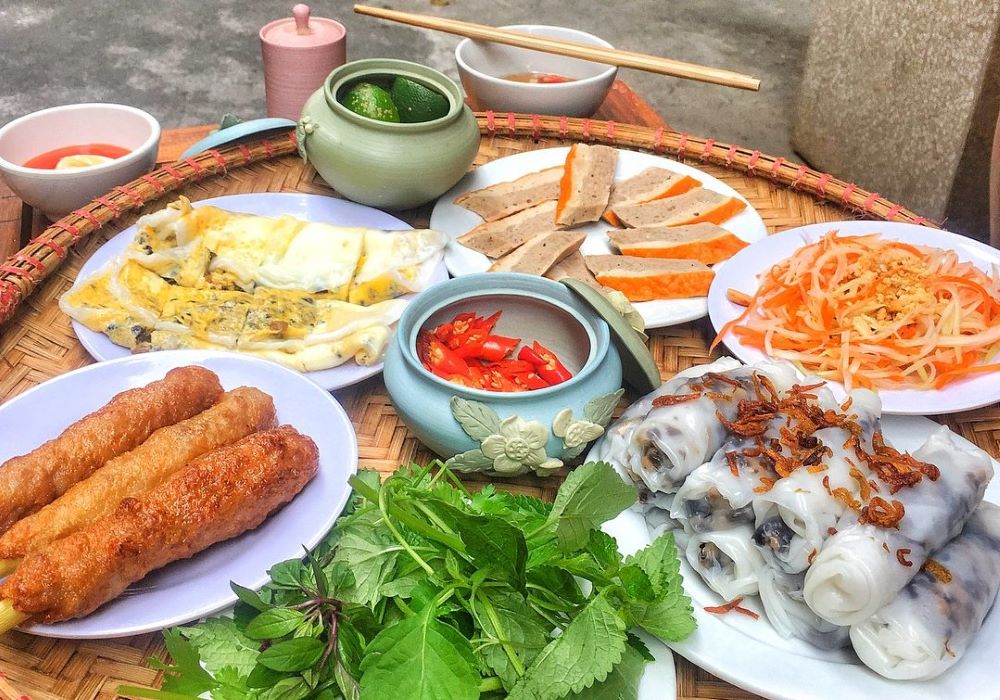 The Banh cuon (steamed rice rolls with pork)- a specialty of Hanoi. Photo: Hai Yen
According to The Times, Vietnamese food is the best in the world. The fragrant dishes of silky noodle soups, spicy meats, tender, herb-infused fish and ca phe sua da (coffee blended with condensed milk and ice) are among the dishes that foreign travelers should try in Vietnam.

The Times also suggested people try wine rice, learn how to make tea in Hanoi, be vegetarian in Hue City as well as discover diverse street food in HCMC.

A little Red Dao girl in Ha Giang Province. Photo: Duy Anh
Joining the 12-day trip titled Vietnam’s Northern Soul by Inside Asia Travel, travelers will have a chance to discover the Northwest region of Vietnam.

“With vertiginous terraced rice fields that flush gold in September, traditional homelands of Hmong, Red Dao and Tay minorities and local markets — that you’ll get a glimpse of rural Vietnam far from its bustling cities. Among its treasures are the regional market at Sa Phin and the palace of a Hmong mountain king who levied a tax on opium and bathed in goat’s milk. Trek, boat and drive by day and spend the night in an eco-lodge and homestays. The trip is bookended by a street-food safari in Hanoi and languid days cruising the dramatic Lan Ha Bay,” The Times wrote.

Wandering around with the ‘Cycling Vietnam’ tour

Affirming that “motorbikes are king in Vietnam”, The Times encouraged visitors to challenge themselves with a 15-day cycling tour titled “Cycling Vietnam”, with a journey from Ho Chi Minh City to Dalat. 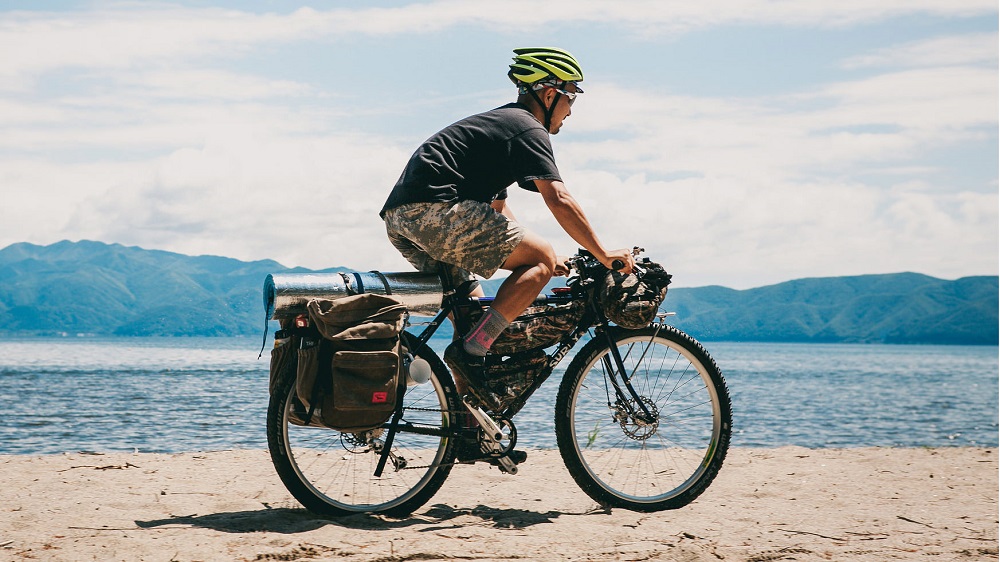 Traveling around with a bike is a fantastic choice for many travelers. Photo: Umove Travel
After manic Ho Chi Minh City, take to the peaceful back roads by bike, exploring fishing villages and stopping off at beautiful beaches. Inland through coffee and strawberry plantations brings you to quirky Dalat, once a French hill station, that has an air of home country with its golf course and manicured parks. A downhill ride through pine-forested mountains ends at Whale Island (Vietnamese fishermen worship whales) for a swim and snorkel.

Untouristed coastal roads push north, and you’ll tackle the Hai Van Pass, a dizzying 500m high, where the sheer-sided mountains plunge towards rippling sandy curves dipping into the midnight-blue East Sea. The Reunification Express train transports you north and to a kayak around mystical Halong Bay. 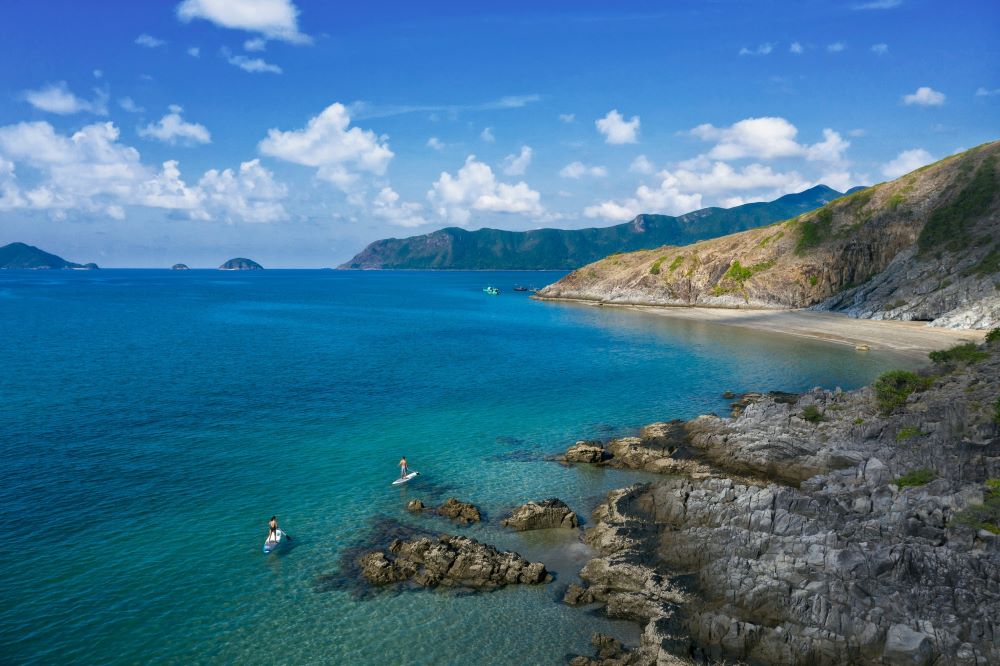 Leaving the capital, tourists will relax on a cruise in Ha Long Bay and visit the limestone mountains from above by helicopter. They can also wander around Ho Chi Minh City on an antique Vespa; then visit the floating market in the Mekong Delta and end up the journey at the luxurious services offered at Six Senses Con Dao - “an isolated curve of sand overlooking a sapphire sea where manatees, dolphins and marine turtles swim” in Con Dao Island.

Discover Vietnam in conjunction with other Southeast Asian destinations

The Forbidden City of Hue, Vietnam. Photo: Yen Duyen
The ‘Southeast Asia Family Journey’ tour by G Adventures is one of the tours recommended by The Times. Travelers will have a chance to enjoy a fascinating water puppet show, learn to make terracotta stuff in Hanoi; visit Forbidden City, learn about the dragon king court and royal gossip in Hue City; join some cooking classes in Hoi An Ancient Town and squeeze into tunnels used by the guerrillas during American War in Cu Chi District in HCMC.

Popular posts from this blog

The volume of international tourists searching for travel information about Vietnam saw a sharp increase at the start of 2022, according to statistics released by Google Destination Insights. A large number of foreigners search aviation related information about Vietnam. Google Destination Insights shows the number of people searching for tourism in Vietnam underwent a gradual increase at the beginning of December 2021, before skyrocketing in late December 2021 and into early January. Over the past month, it reports search results relating to aviation reached at a very high level, up 425% compared to the same period over the last year. Furthermore, demand for seeking information about accommodation facilities witnessed a sharp rise in early January, marking an annual increase of 42%. People looking for tourism information in Vietnam mostly came from the United States, Australia, Russia, France, Singapore, India, Japan, Germany, the United Kingdom, and Canada. This tool also indicates t
Read more Vietnam no longer at high risk of COVID-19 community spread

The US Centers for Disease Control and Prevention (CDC) decided on April 18 to lift its "Do Not Travel" COVID-19 recommendations for roughly 90 destinations worldwide, including Vietnam. Illustrative image. – Photo: VNA The CDC recently outlined their plans to revise its travel recommendations, stating that it would reserve Level 4 travel health notices "for special circumstances, such as rapidly escalating case trajectory or extremely high case counts". The countries and other regions which have dropped to "Level 3: High," still discourages travel for unvaccinated Americans, including the UK, France, Israel, Turkey, Australia, Greece, Hong Kong (China), Italy, Japan, the Republic of Korea, Spain, and Russia. Other nations also being lowered are Switzerland, Austria, Belgium, Bulgaria, the Central African Republic, Chile, the Czech Republic, Jordan, Lebanon, New Zealand, Norway, Portugal, Poland, Somalia, Uruguay, and Vietnam. The CDC currently lists no co
Read more

The green city with a long cultural history, friendly people and reasonable prices is top of mind for many foreign tourists. Hanoi is one of the best destinations along with Crete (Greece), Porto and Lisbon (Portugal), Seoul and Busan (South Korea), according to a list of “Best and Worst Cities for Traveling alone” composed by the US's travel website BuzzFeed. Hoan Kiem - the iconic lake of Hanoi. Photo: Khanh Huy According to Hannah Loewentheil, staff writer of www.buzzfeed.com, whoever you are: a person who love travelling alone or the one who just think about the first solo adventure, there are certain destinations that are especially great for solo travelers. “So, I rounded up responses from the www.reddit.com/r/travel of the best and worst destinations for anyone thinking of traveling alone,” she wrote. Hannah also suggesteds travelers that there's always risk involved with any type of travel, so it's important to do your own research and take precautions whether going
Read more