U Minh Thuong wetland reopens to eco-tourism after long hiatus

U Minh Thuong National Park in the southern province of Kien Giang has been welcoming an increasing number of tourists after months of closure to prevent COVID-19 and wildfires. U Minh Thượng National Park in the southern province of Kiên Giang is one of the two most important peatland areas in Việt Nam. VNA/VNS Photo Lê Huy Hải
Eco-tourism activities at the park, the world’s 2,228th Ramsar site and the eighth in Việt Nam, have been reformed with a new model gradually developing.

Management officials said many tours with diversified services had been improved, focusing on environmental education and attracting the participation of the local community. Part of the natural landscape in U Minh Thượng. — Photo courtesy of WWF
Trần Văn Thắng, deputy director of the national park, said thanks to the park’s untouched nature and healthy fresh air, it has welcomed an increasing number of visitors.

The park had to close last May due to COVID-19 restrictions. It has also been placed in a two-month routine closure as part of the efforts to prevent forest fires during the dry season.

In 2021, the park received over 26,000 visitors, equivalent to just 38 per cent of the yearly plan. It was allowed to reopen on January 20 this year and since then has served more than 11,000 visitors.

Many took sightseeing tours around the park to enjoy the unique wetland ecosystem, while others came for fishing.

Vũ Văn Chất, a tourist from Hà Nội at the park, said he and many others in his group were thrilled to see the wetland ecosystem, especially the vast melaleuca forest.

He was particularly amazed at the water’s red colour and many species of wild birds, bats and monkeys.

Chất said after visiting the melaleuca forest, all members of his group bought local specialities, such as honey and fish sauce, as gifts for friends.

Another tourist, Nguyễn Văn Đông, from Đầm Dơi District in the neighbouring province of Cà Mau, said he was very passionate about catching fish, and only in the National Park were there the native fish species he was interested in.

He and his friends usually begin their trip at around 4am to have plenty of time to travel deep inside the park to go fishing.

“They can visit the wetland ecosystem by boat to see local plants and animals such as cajeput, water lilies, storks and bats. The regenerated melaleuca forest ecosystem and forest watchtowers have also attracted visitors to enjoy the panoramic view of the whole forest,” Diễm said.

Located about 65km to the southwest of Rạch Giá City, U Minh Thượng National Park, one of the two most important peatland areas in Việt Nam, boasts unique and rare features that are hard to find anywhere else in the country or even the world.

At its 19th session in Paris in October 2006, UNESCO designated the Kiên Giang Biosphere Reserve, which includes marine and insular areas, as part of the World Network of Biosphere Reserves.

This reserve is the fifth in Việt Nam to earn the UN science agency's recognition and the second-largest among the nine biospheres reserves in the country, following the area located in the west of the central province of Nghệ An.

U Minh Thượng is in the core area of the Kiên Giang reserve and a key site for wetland biodiversity conservation in the Mekong Delta. It is the only park with a purely primaeval forest among forest ecosystems on acid sulfate soil in the Mekong Delta.

The park is also an Important Bird Area (IBA) of Việt Nam and the Association of Southeast Asian Nations (ASEAN) Heritage Parks.

IBAs are forest or wetland areas important for the conservation of bird populations and other fauna and flora species, according to the International Union for Conservation of Nature (IUCN).

There are 63 IBAs in 37 provinces and cities across Việt Nam, covering nearly 1.7 million hectares or 5 per cent of the country’s natural area. 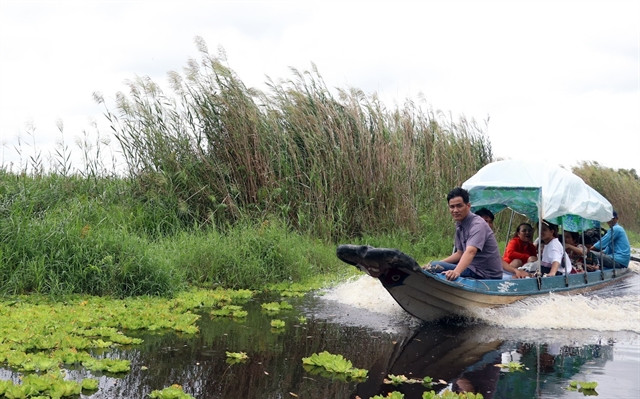 Tourists explore and experience U Minh Thượng National Park by boat. — VNA/VNS Photo Lê Huy Hải
A survey in 1995 showed that U Minh Thượng boasts about 3,000ha of primaeval forest dating back 6,000 years.

Additionally, the park is one of the two most crucial peatland areas in Việt Nam; the other is U Minh Hạ in the neighbouring province of Cà Mau.

The cajuput forest ecosystem on peatland in U Minh Thượng holds particular importance as it nurtures hundreds of wild animals, including birds, mammals, reptiles, amphibians, fish, insects and many aquatic species.

Thirty-two mammal species have been found in this park, including 10 species listed in Việt Nam’s Red Data Book and the IUCN Red List, such as the hairy-nosed otter, fishing cat, Asian palm civet, Finlayson’s squirrel and Sunda pangolin.

Moreover, it owns the richest biodiversity in terms of plants in the Mekong Delta, harbouring more than 254 plant species. 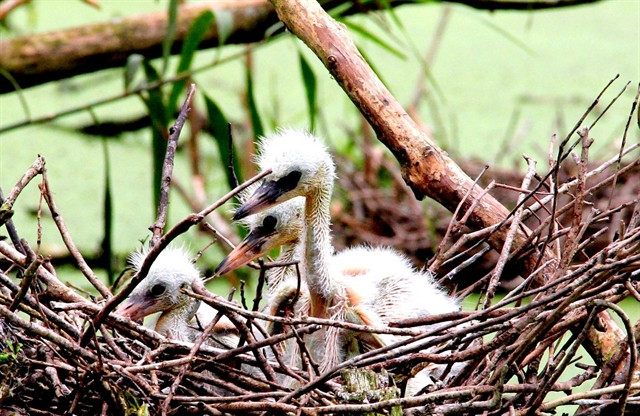 White storks nest in U Minh Thượng National Park -- a Ramsar site, an Important Bird Area of Việt Nam and a heritage park of the Association of Southeast Asian Nations.— Photo of WWF
So far, 72 rare animal and plant species listed in Việt Nam’s Red Data Book (2007) and the IUCN Red List (2012) have been spotted in U Minh Thượng.

A report from the IUCN says the peat swamp forest, a rare wetland habitat in the Mekong Delta, is strictly protected in the core zone of U Minh Thượng.

However, fires and farmland conversion have reduced their geographical coverage.

The practice of water stocking, following the 2002 catastrophic forest fire, has permanently inundated almost all areas of the melaleuca forest and has resulted in poor tree growth.

The pumping of outside water to maintain water levels brings in saline water, which may fundamentally change the freshwater conditions. Melaleuca forests are “moderately vulnerable” to climate change. 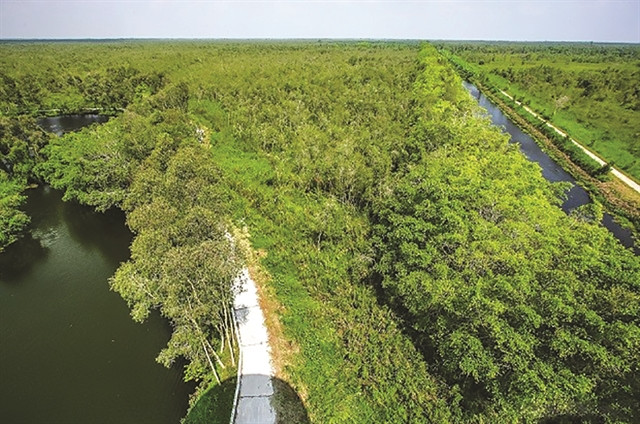 U Minh Thượng is a key site for wetland biodiversity conservation in the Mekong Delta. It has great potential for eco-tourism development.— Photo thiennhienmoitruong.vn

Over the past years, authorities of Kiên Giang have made strong efforts to conserve and recover natural resources on the peatland to keep the wildness of the ecosystem and biodiversity in the National Park.

In 2015, it was recognised as a Ramsar site – a wetland of international importance.

Given the park’s natural beauty and rich biodiversity, local authorities have been carrying out a project to develop eco-tourism in U Minh Thượng for 2019-2020, with a total investment of over VNĐ150 billion (US$6.46 million).

The project aimed to preserve natural resources and biodiversity while making the most appropriate use of the forest’s potential to develop eco-tourism and environmental education in the park.

The province will gradually complete the infrastructure system in the park and create attractive tours to make U Minh Thượng one of the outstanding national parks in the Mekong Delta and the world, according to the Kiên Giang provincial People’s Committee.

Deputy director of the park Thắng said to implement tourism development the park would improve its management role and perfect the method and organisational apparatus for tourism while accelerating investment in infrastructure and creating new tourism products to attract more visitors.

He added that it had also strengthened the protection of natural landscapes and waste treatment in the park.

Nui Thung: the angel eye of the mountain in Cao Bang

Located in the middle of a beautiful valley in the border district of Tra Linh, Angel Eye Mountain, locally known as Nui Thung, is a favourite place for camping activities of young people in the northern Cao Bang Province. Nui Thung: the angel eye of the mountain in Cao Bang Province. Nui Thung impresses visitors with its unique appearance as it has a hole, measuring 50m in diameter, passing through its face, which looks like a giant eye in the centre of the mountain. At the foot of the mountain, campers can find the perfect place to set up their camps on immense grasslands or by green lakes. They can admire charming natural landscapes while walking around and taking photos. When night falls, the temperatures can drop as low as winter. Even though a campfire may be built, campers should prepare warm clothes in advance. Tay ethnic women rowing a bamboo raft on the lake at the foot of Angel Eye Mountain Upon rising, an interesting activity at the beginning of the day is paddling a stand-
Read more

May 13, 2022
Bach Long, the world’s longest glass-bottom bridge, offers the brave a special walkway 150 meters above a valley.
Read more